"Many years back, when I came to Kathmandu in search of creative jobs, I had no connections and had no idea where to go to get work. With a lot of struggle, I finally managed to get my first creative job as a radio artist in Radio Nepal. I am really happy that Srijana Sutra has initiated such a creative platform to provide creative jobs that talented creative people will no longer need to be unemployed," said Dipashree, reminiscing her initial days of struggle.

"I wanted to become an actor when I first entered the film industry, but later ended up becoming a film director. Our film industry is still very close- knit that you get work only if you have the right connection. Today there is immense scope in creative jobs and good pay too, " said Bulbul fame director Binod Paudel. 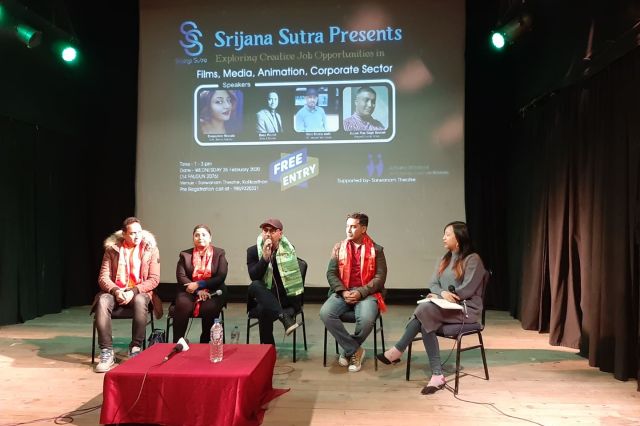 "Creative job industry is booming everywhere and in Nepal too. In the beginning, when I tried to bring animation works of Hollywood films to Nepal, initially I had to convince a lot of people that Nepali animators can deliver equally good work; but with the skills shown by our talented Nepali animators; there's so much international animation works that are coming to Nepal; paving many job opportunities." said Hollywood animator from Nepal, Kiran Bhakta Joshi.

“There are lots of creative job opportunities in corporate sector. I am glad Srijana Sutra has initiated this beautiful creative connection between creative people and corporate sector." said Asheem Man Basnyat, Regional Director of Pathaao.

Srijana Sutra is founded by film writer Sampada Malla and music video director Subhash Pradhan. "Even today, people want their children to get into conventional jobs and become doctors and engineers. They are unaware that there are so many opportunities in creative jobs. We aim to create a creative platform and connect these creative talents to the right places." said Malla.